With only a few weeks until Cyber Weekend, limited time remains for dialing in your bid automation strategy.

Algorithmic bidding, while powerful, also has its limitations. One of those limitations—sub-optimal performance during periods of significant conversion rate volatility—is particularly pertinent to advertisers during the holiday season. Understanding this limitation, as well as strategies for mitigating it, can put your Google Ads account in a better position to make the most of Cyber Weekend.

What do we mean by ‘periods of significant conversion rate volatility?’

Effectively, it’s any period in which conversion rates briefly spike before returning to historical averages. While setting a threshold for ‘significant’ may seem arbitrary, it’s important to distinguish between day-to-day volatility (which will be a function of ever-changing user behavior) and larger fluctuations that can be traced to specific causes for changes in user behavior, such as promotional periods. Following Search Ads 360’s best practices for seasonality adjustments, we can consider a period of significant conversion rate volatility to be a period of six hours or more where conversion rates increase by 30%-plus, above their preceding average.

Clearly, Cyber Weekend will meet these criteria, stretching as it now does well beyond the weekend proper, with certain days seeing triple-digit increases in conversion rate compared to the same day weeks prior.

Why is conversion rate volatility a problem for algorithmic bidding? 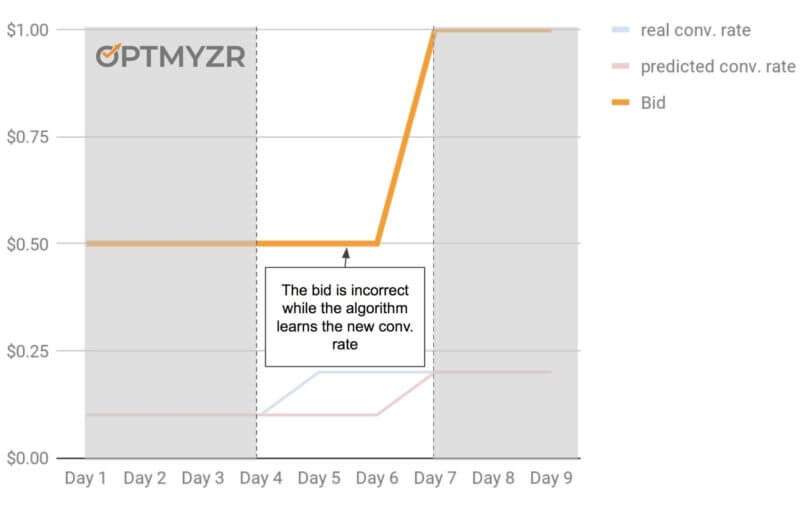 Despite impressive strides in the technology, the ‘black box’ of algorithmic bidding appears to assign great weight to recent historical performance. This creates lag between changes in conversion rate and adjustments in the behavior of the algorithm, as it takes time for the automation to determine whether a change in conversion rates represents a sustained and material change in user behavior, or is merely a short-lived aberration that doesn’t necessitate a change in orientation to the auction.

During periods like Cyber Weekend, this can mean substantially under-spending at a time when users are especially primed to purchase (in addition to responding to deep discounts). Under-spending for even a few hours could mean losing out on tens of thousands of dollars in revenue.

The opposite issue arises on the back end of Cyber Weekend. Having just experienced several days of above-average conversion rates, algorithmic bidding will continue to bid aggressively before realizing that user behavior has changed once again.

An active approach to managing algorithmic bidding can reduce some of the above inefficiency by reallocating wasted ad spend to periods where it will be more effective. Over Cyber Weekend, this means preemptively increasing bids when conversion rates are expected to increase, and pulling back as they revert to historical averages.

There are a couple of different ways to achieve this while still making use of bid automation:

Both Google Smart Bidding and SA360 bid strategies allow advertisers to set ‘seasonality adjustments,’ through which changes in bid behavior are governed by inputting anticipated conversion rates. Historical data will often be the best guide, and it may be worth tailoring adjustments to specific days (Black Friday will tend to convert better than Saturday–Sunday; Cyber Monday will tend to convert better than Black Friday).

The SA360 version of this tool is slightly more complex and can incorporate the impact of the discount offered during the promotional period.

It’s important to note that while historical performance is a useful guide in thinking about the upcoming holiday, no Cyber Weekend is truly the same. User behavior has changed extensively over time, with purchase behavior tending to shift to weeks preceding Cyber Weekend (a trend that was particularly prominent in 2019, as advertisers adjusted promotional strategy to adapt to a late Cyber Monday and shortened buying season).

While the use of seasonality adjustments can improve a strictly automated approach to bidding, a more involved approach may ultimately be better suited to dealing with an unpredictable weekend. Target ROAS adjustments involve manipulating the target that your campaigns and ad groups are aiming at (in SA360, this will live at the level of the bid strategy, which can contain multiple campaigns). This means we can intervene to tell the algorithm to get more aggressive (decrease target ROAS) or more conservative (increase target ROAS) in response to anticipated and actual conversion rates.

Note: this can often require changing targets quite considerably. Driving unique categories to perform at or near your ROAS goal can necessitate adopting highly varied targets tailored to variation in category performance.

While the approach you choose may depend on comfort and experience modifying bid automation, the target ROAS adjustment approach may provide more control, which can be important when actual conversion rates differ from anticipated conversion rates (which, again, is almost always the case since Cyber Weekend performance differs considerably year to year.)

Whichever approach you opt for, it’s also important to raise campaign budgets to accommodate the anticipated increase in ad spend. More aggressive ROAS targets will make little impact on incremental revenue if budgets are capped out midday on Black Friday.

There are numerous opportunities to apply these strategies productively during periods outside of Cyber Weekend. Taking an active bid management approach during the entirety of the holiday season is paramount, but even outside of Q4 there are benefits to re-balancing the portfolio of campaigns, ad groups, and bid strategies in response to performance data. But narrowing out focus once more to the holiday season, keep in mind another important date for retailers: shipping cutoff.

As users realize their gifts won’t arrive in time, conversion rates will fall dramatically—often below pre-holiday historical averages. Because this event is preceded by 30-plus days of elevated conversion rates, the algorithmic bidding may spend aggressively for days on end at ROAS well below stated targets. Intervening to raise your ROAS targets to deal with this decrease in conversion rate can mean saving thousands of dollars in wasted ad spend. Don’t underestimate how aggressive this pullback will need to be; we’ve found ourselves raising targets from under 500% to over 2000% to mitigate potential overspend by algorithmic bidding in the wake of shipping cutoff. For this reason, reducing daily budget limits is also highly recommended.

While it’s too late to engage in more substantial account changes (save those for Q1), it’s not too late to review your bid automation strategy heading into holiday. Check 2019 Google Ads account change history to determine the extent to which this strategy was deployed last buying season, and speak with your agency about their plans for navigating Cyber Weekend conversion rate volatility.

Ready to get started?

Let us provide a free campaign audit to show you missed opportunities.